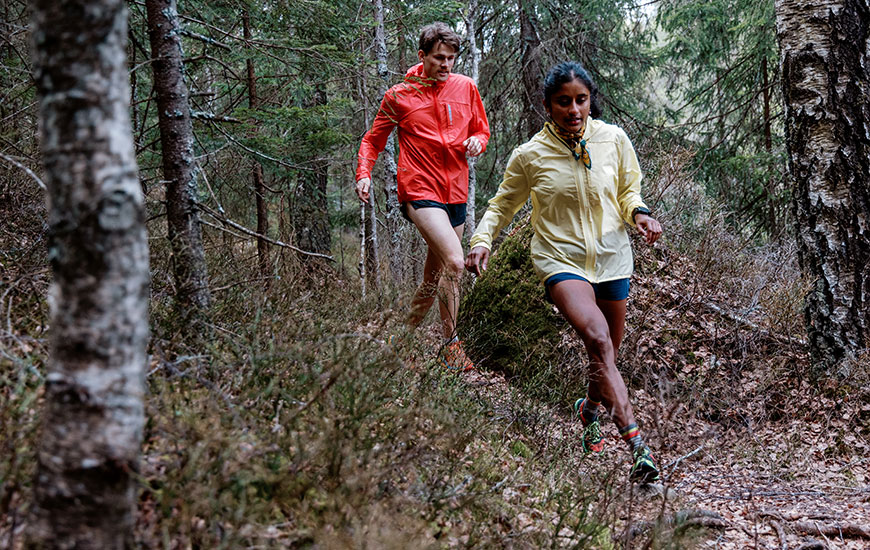 "Don't stick rigidly to the distance or elevation. I usually think I’m just going on an adventure. When you're running from work or home, over the mountains here, you don't think about the distance."

Shanga Balendran (27) tells us about her run from Svolvær to Kabelvåg in Lofoten, where she lives. The mountains she is talking about is Tjeldbergtind and the distance is just over 10 kilometers with elevation of at least 3-400 meters'. It's not at all like taking the bus!

For 25-year-old Kristoffer Eftedal, who is running with us, running is about both companionship and competition. But above all, running should be a game.

"I like to say that I run for pleasure, but now I’m someone who thinks that everything about running is fun! Even the hardest interval can be pleasurable, so you have to be able to enjoy it and have fun," he says. 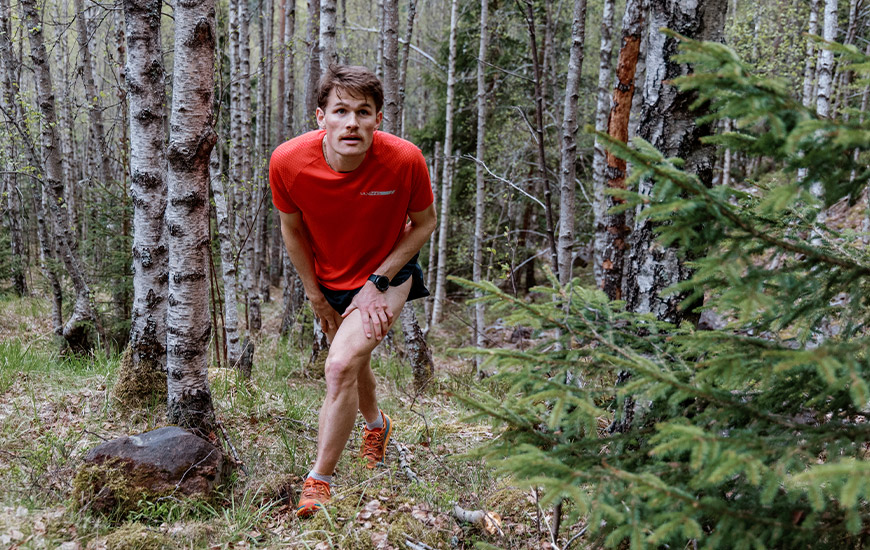 We’ve joined Shanga and Kristoff on a training run in Lillomarka, outside Oslo. The two ultrarunners maintain a steady pace across the hilly terrain, which this part of the forest is known for.

To call yourself an ultrarunner, you have to be comfortable running farther than a traditional 42k marathon. But you can also call yourself a mountain runner or trail runner, without having to run so far. As Shanga and Kristoff put it, the goal is more about finding what's right for you and your body in the joy of running. 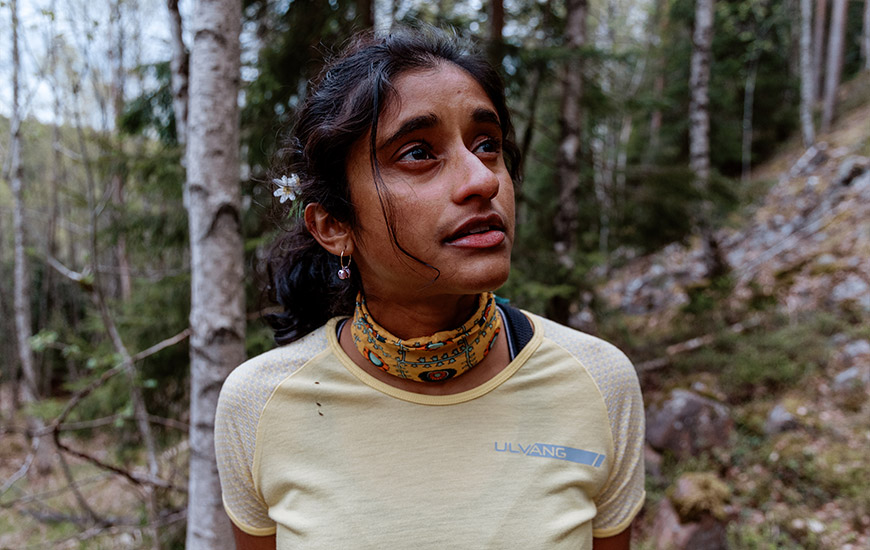 "There are very few things that give you the same feeling as running in the mountains. It’s a feeling of being at one with nature," says Shanga while we have a rest.

"I love flowers, I think it’s fun looking at the different mountain flowers and birds, and learning the names of species, and so on. You get to see a lot when you're out for a long run on the trail, so I don't really care about the competition and the training part of it, even though I have a broad training background."

She sticks a wood anemone in her hairband before we run on.

For your average sneaker wearer, an eight-hour run can seem daunting, but the arguments for giving it a go here are pretty persuasive. But where do you start?

Both our running companions explain that they have a background in organized sports from childhood, but the common denominator is that they have always enjoyed running. They started on long distances a few years back.

"I’ve always run, in a way. But it was when I moved to Bergen to study that I pursued running more, and the runs became longer and longer. Back then I would run in the mountains almost every other day. Since then, the pleasure has just become more and more," says Kristoffer. 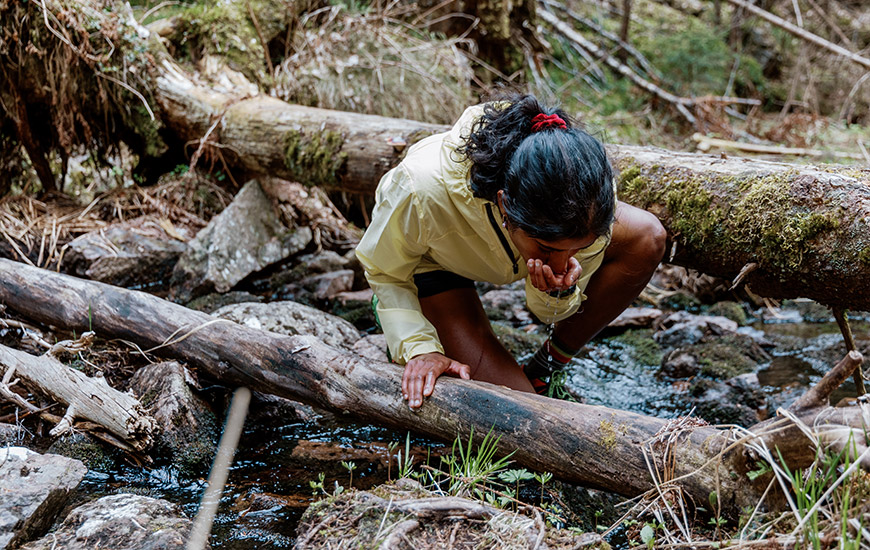 It sounds just as simple as the sport itself basically is: Just run a little more every day and you’re suddenly there.

"I like heading out and then suddenly 8 hours have gone. I’ve forgotten time and absorbed myself in the birds, the peaks and the flowers. I can reach a peak and feel that “Oh, I can easily reach the next peak and the next...” says Shanga.

"My body has come further today than it had four years ago. It’s a really deep sense of achievement," she adds. 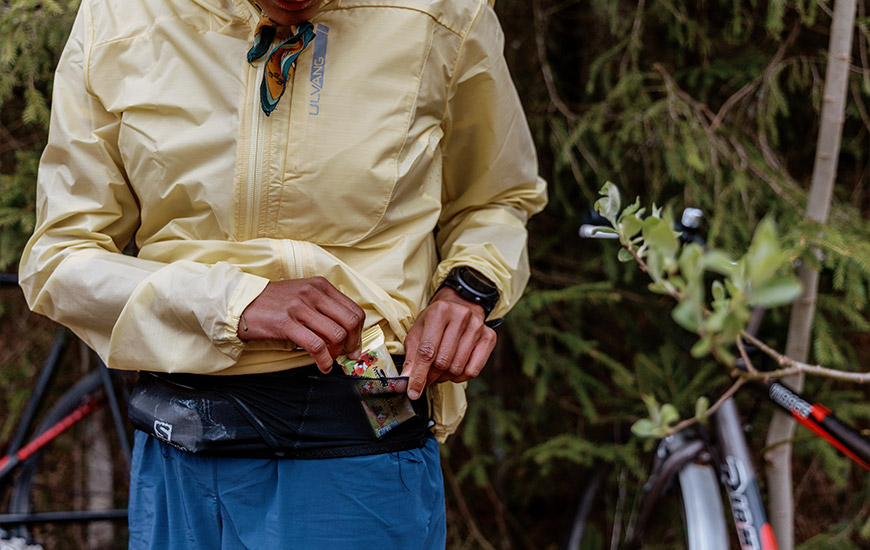 It’s about being not being weighed down and free to move, but if you’re heading into the mountains for a while, you also need to be prepared for changes in the weather. That’s why they have a small hip belt with them to carry a few provisions and they choose their clothing carefully.

Wool is therefore one of the most important bits of kit, because then you’re always prepared.

"Shoes with good grip are important, but it is even more important that they fit your feet. And for someone who lives in Lofoten, I usually say that it’s wool briefs season all year round!" laughs Shanga.

"I mainly only run in wool t-shirts, wool briefs and thin wool socks. I do that all year round," she adds. 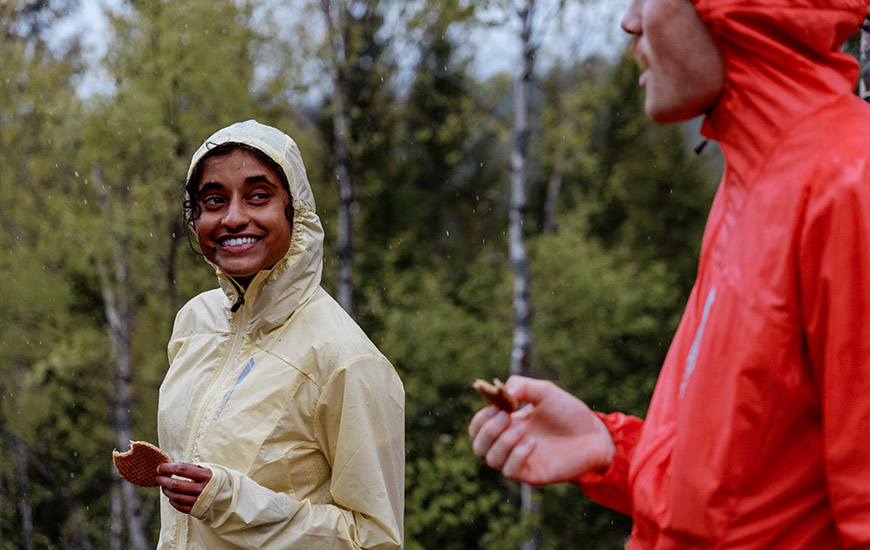 The reason why a good wool t-shirt is so important is because sheep don't sweat. You would think that wool is impractical for sheep on a hot summer’s day, but it actually helps to regulate their temperature. Plus, it blocks out UV rays, so sheep don't get sunburnt either!

The durable and airy fibers are the reason why wool is a good companion for running. It’s also gentle on the skin and allergen-free. That’s why they're wearing Ulvang’s Pace t-shirt in Wool today. 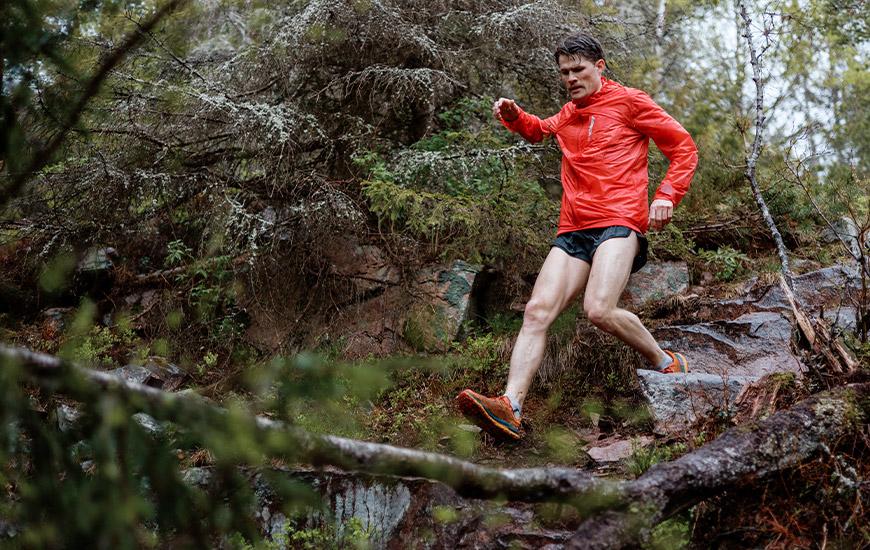 For Kristoffer, there is another obligatory item on the packing list:

"Permanent items of the kit are short slit shorts and wool socks – all year round. I wear these as wool is comfortable if your legs get wet. Then it's not a problem. It doesn't feel wet or cold, even when it’s cold outside," says Kristoffer.

"Also, wool is antibacterial, so you don't get problems with your legs when wearing shoes for a long time."

For those of you who have heard the advice before, whether it’s on a run or being a parent of young children, we know that it’s not always that easy "To just enjoy it", but to like running helps cultivate the pleasure. Then the hard work becomes secondary.

So it’s all about enjoying what the running brings you – and remember to play on the trail!

"The game for me can take shape in so many ways. When I ran over a muddy puddle, the game was to stamp as hard as I could in that puddle. It can be as simple as watching the mud splash out the puddle."

"It can be jumping from stone to stone, flapping your arms as you go downhill. You have to have fun, it’s actually good exercise too! It creates a form of natural movement.

Merino wool, which fabric weight do I need?

Merino wool is one of the softest things you can wear. As well as giving you optimal insulation, it doesn't cause...

Wool as a next to skin layer

We love wool here at Ulvang! That's because it's an awesome natural product with completely unique properties. Did yo...

Why do some wool garments itch and others don't?

Wool base layer for training on cold days

It’s easy for your motivation to drop in line with the temperature, but it doesn't have to be that way. There are...

Make use of all that nature has to offer to boost your health and strengthen your muscles. Here are some top tips for...

It doesn't take much for you to feel the effects of training. Here are some ideas for short 10-minute workouts, and...

If you haven't tried wool mesh baselayers before, now's the season to give it a go. We love wool here at Ulvang. But ...

Grabbing your wool sweater as soon as the temperature drops and the weather gets colder is not some fashion fad....

Sheep have been with us humans for many centuries, and all over the world their unique wool has helped protect us fro...

For Gamle Oslo Tre & Tekstil, a defective Ulvang wool sweater is worth its weight in gold.

How to wash wool socks

Many people are unsure about how to wash wool. Here’s a simple guide on how to wash your wool socks and prolong their...

The choice of a wool baselayer or a synthetic baselayer depends on several factors such as intensity, activity and...

Wool has many wonderful properties, which is why it also makes great baselayers.

Although our European neighbors also have sheep and goats, they barely use any wool at all. We Norwegians, on the oth...

Wool has gained a new meaning in recent years, although it has always been popular, there are now clothes in merino...